Why not? I have no fear of Rejection! 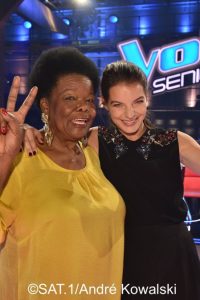 “Age is only a number,” Janice says with conviction. Recently the TV audience of the TV show “The Voice Senior” on Sat.1 could convince themselves of her energy and her ability. Janice qualified with “Honky Tonk Women” from the Rolling Stones and “Hound Dog” from Big Mama Thornton and reached the finals of the last eight.

The makers of the show “The Voice Senior” had called Janice and asked her if she wanted to participate in the first season of The Voice Senior. Why was she asked? She doesn’t know exactly. “The daughter of a friend participated at ‘The Voice Kids’. Maybe she suggested me to the editors,” she suspects.

That she would join the show for talented singers from the age of 60 was no question for Janice. “Why not? I have no fear of rejection. If you don’t try, you can’t find out whether it succeeds!”

At the show and her appearances she felt really comfortable. “Everybody there was very nice to me. And hey, the producers were really interested in me. Who at my age can say that about themselves”, says the thoroughbred musician.

Even if she did not win “The Voice Senior”, she would always join in again. For Janice the show and all the other stuff was simply fabulous.