Janice has a tremendous pool of musicians to choose from; book her as the guest star for an existing band, as a duo, a trio, or with any number of musicians that forms the best possible band for the desired concert.

The Roots Of Gospel And Spirituals

In memory of the great Gospel star, the audience can sing and dance to classics of Gospel music like „Oh Happy Day“ and „Amazing Grace”. 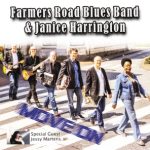 When it comes to the Blues, this is Janice’s band of choice. Over the last 30 years, this band has become one of the standard blues bands in northern Germany. With their mix of rocking Blues standards, hot dance pieces and own ballads, the band has developed an unique style.

Together with her musicians, Janice brings Dinah’s legendary small groups back to life.

Timing and luck brought me together with Keter Betts, the former Bass player with Ella Fitzgearld, Jimmy Cobb, the former Drummer with Miles Davis and Lloyd Mayers, the fabulous piano player, conductor, arranger from Broadway.

Alberta Hunter was born in 1895 in Memphis, Tennessee. In her early years, she made a living with jobs like potato peeling. Her greatest success as a singer and songwriter dates back to the 1920s and 1930s. She wrote the “Down Hearted Blues”, made famous by Bessie Smith. In 1924, she recorded various tunes with Louis Armstrong. During World War II and the Korean War, Alberta was an USO emissary, singing for American troops. With a fake diploma and a made-up birth date, she was hired as a nurse until 1977, when she was retired without her consent. One year later, she had her comeback as a singer with TV appeareances, a concert at the White House and intivations all over the world, as for example to the “Berliner Jazztage” 1892 with live TV broadcast. Alberta performed until shortly before she passed away in 1984.

Tom Shaka, an American Bluesman of Sicilian ancestory, began singing and playing the guitar at the age of eleven. Born 1953 in Middletown, Connecticut, U.S.A., he is known today for his musical versatility and virtuosity. Besides singing and playing the guitar, he is also proficient at harmonica, ukulele, mandolin and one-string-git-fiddle. deeply inspired by Blues pioneers such as Charley Patton, Robert Johnson and John Lee Hooker, to name but a few, he began his career in the early 1970’s. It was, and continues to be, the above mentioned artists as well as musicians like Ray Charles, Taj Mahal, Snooks Eaglin, and especially his personal friends and musical partners David “Honeyboy” Edwards and Louisiana Red who have significantly influenced his own personal Blues-style.

Werner Gürtler is one of the most well-known traditional Jazz trombonists in Northern Germany. If time permits, he leads his own amateur Jazz band. His job as a piano tuner has become more like a hobby to him. Many bands book him as a guest star with concerts and Jazz festivals.

Born in Oklahoma, and raised on U.S. Air Force bases and very small towns in New York, New Jersey, New Hampshire, Florida, and Newfoundland, Canada, Dylan spent his formative teen years playing electric and acoustic guitar in rock, soul, and country bands, and passionately studying the music of J.S. Bach and John Dowland on solo classical guitar. He studied music and composition at State University of New York at Albany, The Guitar Workshop (Roslyn, NY), and State University of New York at Stonybrook. From the Conservatorio Oscar Esplá in Alicante, Spain, he received the title of Professor of the Guitar and the Outstanding Achievement Award (Prémio Extraordinario) under the tutelage of the legendary José Tomás.